MADELINE: Imprisoned in a loveless marriage, Lady Briarton yearns for escape with a passionate stranger, but her unearthly lover is not who he claims to be. Can she risk her heart--and her very life--with the beautiful Scot who sets her blood and her body on fire, even as he claims the impossible?

SIMON: Forced to roam the earth for more than a century following the Battle of Culloden, Simon McKenzie is a hunter, and the sad, lonely woman walking the grounds of Hartsdale Castle on the Eve of Samhain is his prey...until she lays claim to his heart and shows him that there can be light in his life once more.

She only needs to invite him in...

If you haven’t yet heard about this wonderful book, be sure to check out all the details below. This post also includes a giveaway. So if you’d like a chance to win, check out the giveaway info below.

Simon stood by the edge of woods, his gaze directed toward Hartsdale Castle. He couldn’t see the house—he was too far away for that—but he didn’t need to. He could hear every word spoken in the grand ballroom, could hear the thoughts of every guest present. Silk rustled, slippers scuffed as Lady Hartsdale’s guests swayed and dipped while the orchestra performed, each melody played more enthusiastically than the one before.

Now and again, champagne glasses clinked as toasts were made. Servants passed silver trays filled with delicious culinary enticements. There was laughter, gaiety.

And in the midst of it all was Madeline. Simon inhaled slowly, savoring her scent even across the distance that separated them. He closed his eyes, narrowing his focus like a spyglass in his mind. Every extraneous sound, every sensation faded away till he was left with only Madeline.

There it was, the sound of her breathing, of her heart beating rhythmically against her ribs, of her blood pulsing through her veins.

Her blood. It called to him, a siren’s song meant only for him. If he spoke to her—no more than a whisper in her mind—would she heed his summons?

No. He wanted her to come to him of her own accord. He would not manipulate her, no matter the temptation, damn it.

Just what was it that made him desire her so?  He wasn’t certain. And yet he felt somehow…protective of her, which was ironic, given the circumstances. After all, he could end her life in an instant, if he chose to.

But he wouldn’t. He had no wish to. Last night was an anomaly for him. Yes, he’d lured her to the woods. Once he’d sensed her presence, realized she was out walking the grounds past midnight alone, entirely vulnerable, he’d played tricks on her feeble mortal mind, confusing her, drawing her toward his lair.

But then…he’d laid eyes on her, and at once everything changed. He could not explain it—didn’t want to, really—but as they sat there together before the fire, he’d felt almost human for the first time in more than a century. He was no longer a predator in search of prey, but a man bent on courtship.

He’d seen the images in her mind, felt the brunt of the humiliation she’d experienced at her husband’s hands, and he’d felt murderous. Not toward the lovely woman sitting before him, completely unafraid in his presence, but toward the man who had made her feel such shame, such sadness.

No, there was no explanation for it. And yet he knew that he would do everything in his power to have her—to possess her, body and soul; to protect her from threats far greater than him.

If only she would let him. 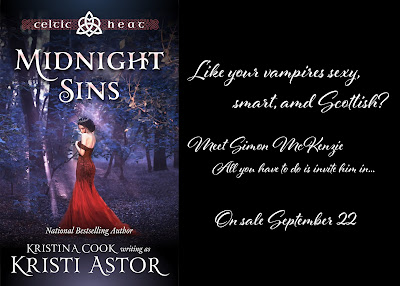 1 winner will receive an Amethyst Bracelet, US Only.

3 winners will win an eBook of MIDNIGHT SINS, International. 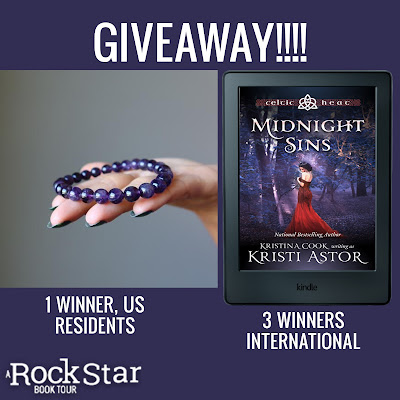 Kristina Cook is the author of more than a dozen books for adults and teens, ranging from historical and NASCAR romance to paranormal and contemporary young adult fiction (also writing as Kristi Astor and Kristi Cook). Since the publication of her first novel in 2004, her books (with Kensington/Zebra Books, Harlequin Books, and Simon & Schuster) have hit national bestseller lists, landed on bookseller association lists, and won awards, including the National Reader’s Choice Award.

When she’s not writing a book or reading a book, she’s probably online somewhere, talking about a book. Kristina lives in New York City with her husband and two daughters, but in the summer months escapes with them to sunny Miami, where she lounges on the beach and teaches creative writing classes at Miami-Dade College.

Excerpt: Spells of the Dead by Faith Hunter (+ giveaway)