Copy generously provided by Netgalley in exchange for an honest review. This does not affect my opinion of the book or the content of my review.

In New York Times Bestselling author Nalini Singh’s newest contemporary romance, passion ignites between a gorgeous, sinfully sexy man who built himself up from nothing and a shy woman who has a terrible secret in her past…

Wealthy businessman Gabriel Bishop rules the boardroom with the same determination and ruthlessness that made him a rock star on the rugby field. He knows what he wants, and he’ll go after it no-holds-barred.

And what he wants is Charlotte Baird.

Charlotte knows she’s a mouse. Emotionally scarred and painfully shy, she just wants to do her job and remain as invisible as possible. But the new CEO—a brilliant, broad-shouldered T-Rex of a man who growls and storms through the office, leaving carnage in his wake—clearly has other plans. Plans that may be equal parts business and bedroom.

If Charlotte intends to survive this battle of wits and hearts, the mouse will have to learn to wrangle the T-Rex. Game on.

Charlotte arrived at work at seven thirty the next morning to find Gabriel Bishop’s office door open, but no carnivorous predator inside. A fresh suit was hanging on the back of his door, however, which meant he’d been in already.

Deciding to catch up on e-mails that had come in overnight from international suppliers as well as stores involved in a stock take, she was typing a reply when a sweaty Gabriel arrived fifteen minutes later. He was dressed in black running shorts and a faded University of Auckland T-shirt that was currently sticking to his body.

She’d known he was in shape, but now she realized none of it was an illusion created by his well-cut suits. Okay, she’d already known that, but seeing his muscled body in the flesh was a whole different ball game. He was built like a tank, hard and powerful.

Each of his thighs was thicker than both of hers put together, his biceps toned, his shoulders appearing even wider than usual. Everything about him was big. Civilized clothing didn’t make him look better, she realized—it toned down his intense masculinity. Out of his suits, with the ink on the upper part of his left arm exposed, as well as that on his opposing thigh and…

Her skin hot and lower body clenching, she just nodded in response to his “Good morning.”

Disappearing into his office, he returned with his suit pants and a fresh shirt slung over his arm, along with a sports bag. “Push the meeting with Sales to nine, will you, Ms. Baird? I need to talk to HR about something before then.”

“Yes, sir,” Charlotte said almost soundlessly, but he was already gone, heading toward the employee shower one floor down.

The thigh tattoo went all the way around, the design intricate.

Heart rate a rapid stutter, Charlotte got up after he disappeared and decided to go grab him a coffee. He’d bought her one yesterday after all. She was just being nice. “Oh, shut up, Charlotte,” she muttered once she was in the elevator, and slumped her face into an upraised hand.

The truth was she was running away. Only for a few minutes, but that’s what this was: strategic retreat. Gabriel Bishop was overwhelming. Once, before she’d ever met him and under the influence of cocktails, she’d told Molly she wanted to rip off his shirt and sink her teeth into his pecs.

That desire hadn’t waned even now that she knew he was a T-Rex. Of course, the desire was all strictly in her imagination. The idea of actually handling him in real life? So impossible as to be laughable. Charlie-mouse was not about to play with a predator who could eat her alive and not even notice the bones. The good news was that she could admire him in relative safety—there was no chance in hell he’d ever notice her as a woman.

Getting the coffee from a nearby café, she took it back upstairs. He was in his office when she entered, the striped dark gray of his tie hanging around his neck and his damp hair roughly combed. The scent of clean, fresh soap over warm skin permeated the office. Shooting her a smile that turned him from gorgeous to flat-out devastating, he flipped up the collar of his white shirt to get the tie in place. “Thank you, Ms. Baird.”

“Get to work,” she muttered and knuckled down.

Gabriel was fine for the first hour, but then he began barking orders even a six-armed woman with a split personality would have had trouble handling.

Finally, pushed to the edge, Charlotte snapped. “I’m going as fast as I can!” she yelled when he asked her for something a minute after he’d asked her to complete another task.

He scowled and held out a file. “This is a priority.”

Grabbing it from his hand, she said, “Fine,” and slapped it down on her desk.

It was over an hour later that he disappeared for ten minutes. When he returned, it was to put a small bakery box on her desk. “I think you need something to sweeten your mood today, Ms. Baird.”

What she needed was for the T-Rex who was her boss to stop snarling and growling, she thought as he returned to his office. Not opening the box until her curiosity had almost killed her, she found it held a slice of decadent chocolate cake with a white-chocolate ganache topped with curls of both white and milk chocolate. “I cannot be bribed with cake,” she muttered, eating a bite nonetheless. 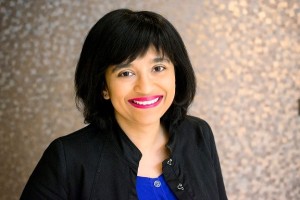 NEW YORK TIMES AND USA Today bestselling author of the Psy-Changeling and Guild Hunter series Nalini Singh usually writes about hot shapeshifters and dangerous angels. This time around, she decided to write about hot and wickedly tempting rock stars (and one gorgeous ex-rugby player). If you’re seeing a theme here, you’re not wrong.

Nalini lives and works in beautiful New Zealand, and is passionate about writing. If you’d like to explore her other books, you can find lots of excerpts on her website. Slave to Sensation is the first book in the Psy-Changeling series, while Angels’ Blood is the first book in the Guild Hunter series. Also, don’t forget to swing by the site to check out the special behind-the-scenes page for the Rock Kiss series, complete with photos of many of the locations used in the books.