Today Kelly Gunderman and Rockstar
Book Tours are revealing the cover and an
exclusive content for LIVING DEAD GIRL, her YA Paranormal Thriller Book which
releases November 1, 2020! Check out the awesome cover and enter the giveaway!

On to the reveal! 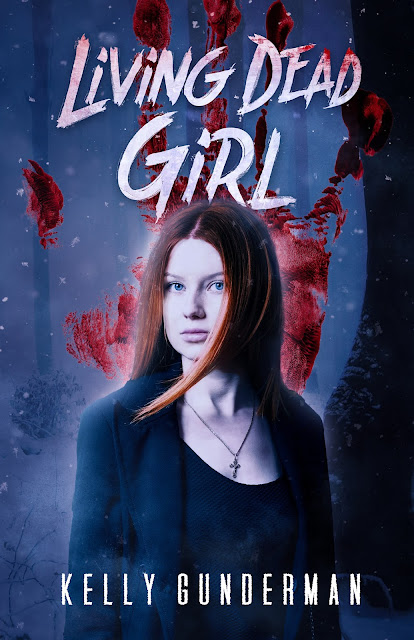 Read for FREE with a Kindle Unlimited Subscription!

“You
can’t seriously be wearing that, Kaitlyn.”

I
glance at Dana and grin.

I ball
up the gold sequined tank top and throw it at her.  “Oh, you just want to wear it,” I tease,
knowing full well she would never touch something that was covered in sequins.
Or the color gold. Dana always told me how she thought gold clothing was gaudy,
even though I thought the color complimented her skin tone quite well.

She
rolls her eyes and picks it up like it’s an old sock, holding it between her
index finger and thumb, contorting her face as though she had just smelled
something rancid.  She flings the tank
top on the bed and plops down next to it, smoothing out the creases that have
formed in my purple comforter.

“I wish
Mark was going to be there tonight,” she says, looking forlorn.

“You’re
defending him because you have a crush on him.
Even though he’s slept with half the girls in the senior class and it’s
only January.  It’s disgusting.  You always have crushes on guys who only want
one thing.”

Dana
grimaced. Obviously I had hit a sore spot with her. She glares at me. “You’re
just pissed because you never get any.”

“And
you do?” I fire back, hoping I sounded as bitter as I felt.  My boyfriend, Eric, had broken up with me two
months ago after we had been together for a year and a half. His reason?  I wanted sex, and he didn’t.

“Hey,
at least my boyfriends put out,” she fires back.

“What
seventeen year old guy isn’t ready?  Especially after being together for that
long?  Be realistic.”  She lies down on the bed on her back, draping
her head over the side.  This position
exposes her slender throat and long, beautiful neck.   She peers up at me, seductively, before smirking

God, she is so beautiful,
was the thought that echoed in my head every single time I saw her.  I bite my lip to keep my thoughts to myself.
Still, that smirk playing on her lips tells me she can already read my mind
without me having to say anything at all.

“I
don’t know.  I guess we just weren’t
right for each other,” I say to her.  It
wasn’t Eric I was thinking about right now, anyway.  It wasn’t Eric I had been thinking about the
entire time he and I were together, either. Part of me wonders if he knew that.

“Oh
please,” she says, rolling her eyes and looking up at the ceiling.

“’Oh
please’, what?  You’re telling me you’ve
slept with every guy you’ve dated?”

“Not
every guy.  Some of them were just good
for kissing.”

Now it
was my turn to roll my eyes.  Sometimes I
wondered if she exaggerated some of her experiences.  She was seventeen and had a new boyfriend
every week.  There’s no way that she
could have slept with all of them,
right?

“Maybe
you should find a girlfriend, if you’re so anti-boy,” she says with yet another
sly smile.  Keep your cool, I tell myself, swallowing the lump in my
throat.  I could use this moment to tell
her that I have, actually, thought about what it would be like to kiss her, to
run my fingers up her spine, to lose myself with her under the covers… but I
don’t.  I can’t.

Instead,
I laugh – a high-pitched, fake laugh.

Luckily,
she buys it.

“Really,
Kait.  We have to take you shopping.  You have nothing
good in here.”  She gets off the bed,
walks over to my closet, and starts rummaging through it to find something that
she would deem “party-worthy.”  The
problem is, I don’t really have anything that she likes – I never do.  I usually borrow her clothes, and it looks
like I might be doing just that again tonight.

“I
know, my mom never lets me buy anything I actually like.”

“My mom
pays for my clothes, you know that,” I tell her, kind of embarrassed.  What seventeen year old girl needs to rely on
her mom to buy her clothes?  I wish my
mom would just give me money – like normal moms.  But no, mine makes sure she comes with me so
she can approve of anything that I pick out first.

Dana
gives me a disappointed look and shakes her head, pushing the tops in my closet
aside.  She pulls out a black halter top
and a red cherry print all over it.
Pondering it for a moment, she sighs and puts it back.

“Not
all of us have parents who give us our own credit card,” I mutter. She either
doesn’t catch it, or she just doesn’t acknowledge it if she does.

“Alright,”
she says, and walks back over to the bed, her bare feet leaving small imprints
in the pale pink carpeting as she moves.
“I think I might have something you can borrow.  Let’s see…”

She
leans over the bed and digs through her duffel bag, throwing pajamas and socks
aside.  She pulls out a short red dress
and brings it over to me.  I look at it,
and my jaw drops.

“There’s
no way,” I tell her, shaking my head.  “I
can’t wear that.”  Not only is the dress
short, it has a dip in the neckline that would reveal a bit…too much. My
parents would never even let me leave the house in something like this.

“You
have to,” she tells me.  “It’s hot.  You’re hot.
Plus,” she says, inching her way back over to the bed and dipping her
hand into her duffel again, “it matches mine.”

“When
did you get these?” I ask, snatching the red one out of her hand.  The price tag is still attached, and when I
glance at it, I instantly consider dropping it in horror.  The tag read $499.95.

She
just shrugs.  “It’s not like I paid for
it.  Either of them, actually.”

“What
did you do this time?”

“Wore
mine under my clothes after trying it on.
I used mom’s Amex for yours.”

“What?  I could have brought necklaces, too.”

“You can’t
really plan on keeping these.”

“Why?  Mom’s drunk so often she doesn’t even bother
looking at the bill.  And dad’s never
home because he’s always out somewhere screwing the flavor of the week.”

“But
still.  You stole that dress. It’s just
not right.”

“And?”
she was getting frustrated, and it was easy to tell I was actually getting on
her nerves.

“Whatever,”
I tell her, taking the red dress. She paid for mine, even if it meant she used
her mom’s credit card. Mine wasn’t stolen, so I shouldn’t think too much on it,
right? After all, I did need
something nice to wear to this party tonight.

“I
thought the red would look nice with your complexion.  And your hair,” she says, reaching out to
touch the tip of my auburn hair.  She had
always told me she was jealous of my hair; it hadn’t come out of a bottle and
she loved that it was a naturally deep red.
What she wouldn’t envy, however, was the fact that I couldn’t even go
out in the sun for five minutes without burning, or the spattering of freckles that
covered my nose when I didn’t wear layers of concealer.

And she
knew it, too.

In this young adult thriller perfect for fans of Pretty Little Liars, Thirteen Reasons Why, and Sadie, a teenage girl is about to find out how far would she will go to get revenge on those who have taken everything from her.
When seventeen year old high school senior Kaitlyn Davis is almost raped and then brutally murdered at a party by three boys she goes to school with, she uses her dying breath to swear that they will pay for what they’ve done.
When she wakes up the next morning, she is a bit blurry on the night before and gets a big surprise - she’s alive? How?
Soon, things start getting weird - it seems as though no one can see her or hear her, and no matter what she does, she can’t seem to feel anything, such as temperature. She can still move things around and touch others, and the room suddenly drops about suddenly drops about thirty degrees wherever she is, but why?
That’s when she is forced to accept it - she’s dead. At first Kaitlyn grieves the loss of her short life - there are so many things that she is going to miss out on, so many things that she will never get to do. But then she gets angry, and she remembers her promise to get revenge on those who had taken her life.
Setting out to give them what they deserve, Kaitlyn has no plans to stop until she gets the revenge she desires.

Kelly Gunderman was born a child of the late eighties in small-town Pennsylvania. A bibliophile in her own right, she is hoping to one day surpass the number of pages she has turned with those she has written of her own accord.

Having recently completed her Bachelor’s in Early Childhood Development, Kelly suddenly found herself with a bit more free time than usual, and began her immediately successful foray into blogging and Freelance Writing, which subsequently led to her renewed desire to finally put her ideas and imaginings “on paper.”

Focusing primarily on the Young Adult genre, Kelly’s first novel, Finding Me, was published by Swoon Romance, and she is currently working on putting even more stories on paper.

She currently resides in her original home town with her husband, their two daughters, and a few cats that constantly challenge the sanity of all with their ill-advised attempts at what can only be assumed to be world domination.